The blood is classified on the basis of the presence and absence of antibodies and inherited antigenic substances on the surface of RBCs (red blood cells).

Facts Associated With the Discovery of Blood Groups

Blood types were first discovered by an Austrian physician, Karl Landsteiner– an Austrian biologist, physician, and immunologist. He distinguished the main blood groups in 1900. He wrote a two-sentence footnote:

“The serum of healthy human beings not only agglutinates animal red cells but also often those of human origin, from other individuals. It remains to be seen whether this appearance is related to inborn differences between individuals or it is the result of some damage of bacterial kind”

The term human blood group system is defined by the International Society of Blood Transfusion (ISBT) as – A system in the human species where cell-surface – antigens- in particular, those on blood cells—are “controlled at a single gene locus or by two or more very closely linked homologous gene genes with little or no observable recombination between them.

As of 2020, the International Society of Blood Transfusion (ISBT) recognizes 41 blood groups.

What is an Antigen?

In immunology, an antigen (Ag) is a molecule or molecular structure, or any foreign particulate matter that can bind to a specific antibody or T-cell receptors.

The two most important blood group systems are ABO and Rh, widely used all over the world. they determine someone’s blood type (A, B, AB, and O, with +, − or null denoting RhD status) for suitability in Blood transfusion.

Regarding the property of antigens in the blood, it can be classified into four groups, 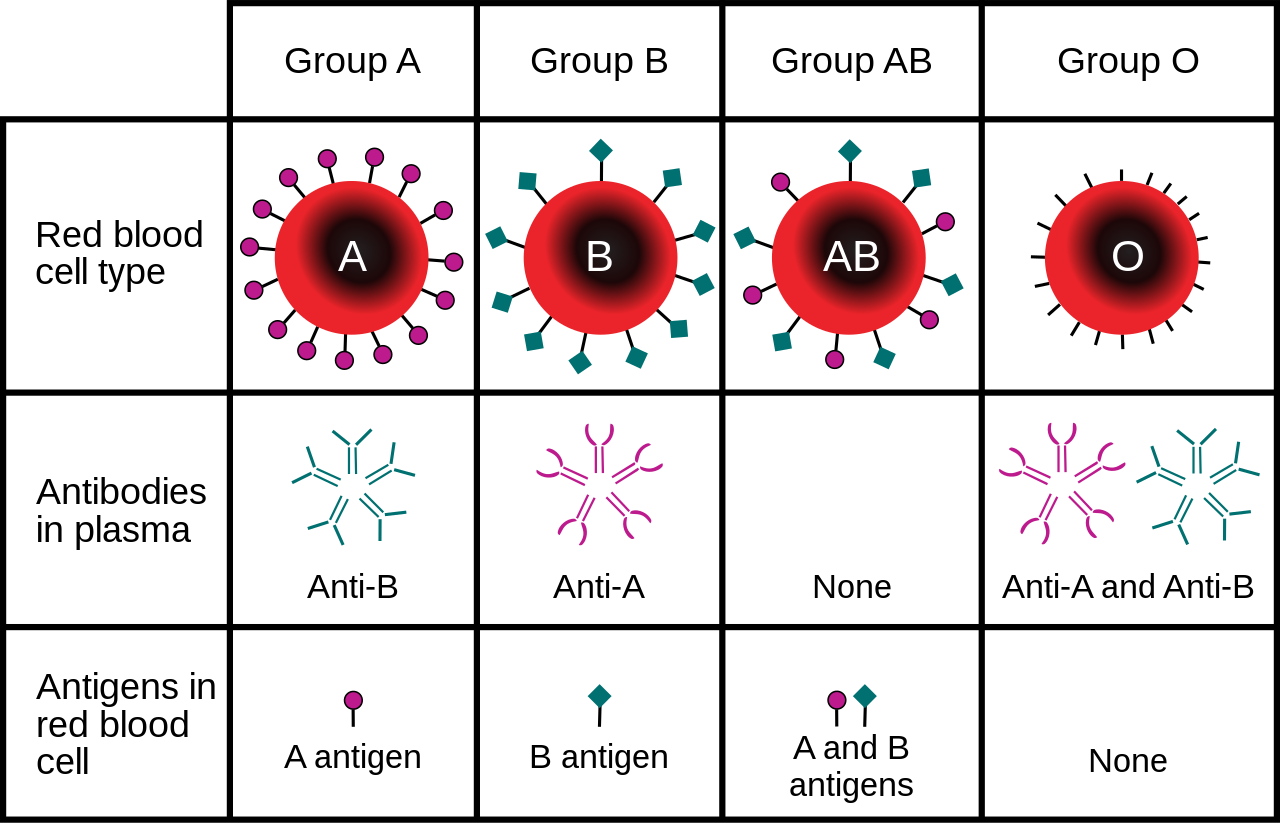 Individuals with blood group ‘A’ show the following features:

Persons with blood group ‘B’ shows the following features:

Blood group O (or blood group zero in some countries)

Blood compatibility test (Blood typing): The blood test is typically performed by the addition of a blood sample to a solution containing antibodies corresponding to each antigen. Agglutination indicates the presence of an antigen on the surface of cells.

It is the second most accepted blood grouping system after the ABO grouping system. The term “Rh” was originally an abbreviation of “Rhesus factor” founded by Karl Landsteiner and Alexander S. Wiener in 1937 in the rhesus macaque RBCs.

If an Rh-negative person gets exposed to Rh-positive blood, specific antibodies against Rh antigens will be formed. The situation causes the death of the blood recipient. Therefore, the Rh should be matched for blood transfusion.

Erythroblastosis foetalis is a special case observed between the Rh-ve pregnant mother with Rh +ve blood of the foetus. Conditions occur as follows:

You can also read:

Dentition in Mammals – Types of teeth and dental formula

Dentition in Mammals Dentition means the arrangement of teeth in the upper and lower jaws on the premaxilla, maxilla, and dentary bones. Development of tooth: Teeth develop over the jaw bone where certain Malpighian cells Read more…

Migration in Birds: Adaptations, Reasons, and Types of Migration

Migration in Birds: Adaptations, reasons, and types of migration Introduction: Migration in birds is a phenomenon in which birds travel from one place to another in search of favourable conditions and more resources for their Read more…

Flight or Aerial Adaptation in Birds

Flight or Aerial Adaptation in Birds The birds have a unique ability to fly and for this, there are various adaptations are acquired. In birds, the most obvious adaptation to flight is the wing, but Read more…